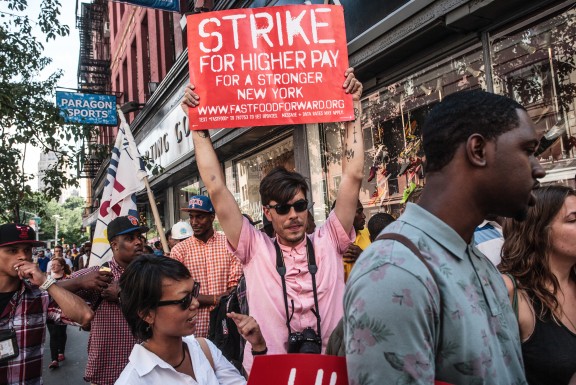 The idea is simple: people who get up and go to work every day in one of the world’s richest countries should not have to live in poverty.

That’s why, across the country and throughout the week, low-wage fast food and retail employees walked out on strike, calling for $15 an hour and respect for their right to organize a union.  Claudette Wilson and her co-workers walked out from a Burger King in Detroit, joined by other fast food workers. Andrew Little and his fellow employees went on strike from Victoria’s Secret and other stores and restaurants in Chicago. In St. Louis, members of the United Mine Workers joined employees of Jack in the Box and Hardee's among other fast food franchises in solidarity. And Terrance Wise hit the picket lines in Kansas City on strike from his part-time jobs at Pizza Hut and Burger King. Workers were striking in Flint and Milwaukee as well. Here in New York, I and some Demos colleagues had a chance to join a rally in support of workers at the McDonalds in Union Square (check out the photo).

The strikes have captured national attention and, not surprisingly, begun to generate pushback from low-wage employers and their lobby. The Michigan Restaurant Association announced that fast food has an “unassailable reputation as an industry of opportunity,” insisting that “many have lived the American Dream by starting in entry-level positions and eventually owning their own restaurants.” But that “unassailable reputation” looks like wishful thinking when you consider the actual evidence: as my colleague Mijin Cha noted last week, data reveals occupational mobility within the fast food industry is extremely limited, and opening a franchise is next to impossible for workers that enter through front-line occupations.

Critics also assert that fast food and retail prices will inevitably rise if wages are increased. After all, the increased pay will have to come from somewhere. But former Wall Street analyst and Business Insider CEO Henry Blodgett points out that:

McDonald's could double its restaurant-worker wages  and not increase its prices at all ... but instead just make a little less money. In other words, it could better balance the interests of all three of its stakeholders — shareholders, customers, and employees — instead of shafting employees to deliver as much profit as possible to shareholders.

Even if McDonald’s internalized the entire cost of higher wages, it would still be a highly profitable company.

The truth is, whether employers internalized costs or not, raising wages at the low end would be good for our economy. As I told ABC News,  Unlike corporations that sit on their profits, when low-wage workers have more money in their pockets, they tend to spend it immediately. The added consumer demand gives businesses a reason to create jobs – a critical consideration at a time when job creation remains sluggish and millions of Americans are out of work.

When my colleague Catherine Ruetschlin analyzed this dynamic in the retail industry last fall, she found that if the nation’s largest retailers significantly raised wages for their lowest-paid employees, it could create 100,000 or more new jobs, not only pulling working families out of poverty but also boosting sales for retailers themselves. While the numbers would look different in fast food, higher fast food wages would similarly enable working people to support their families and create jobs.

That’s why I joined the picket line this week, and will be on the next one too.