On Monday, Ezra Klein argued that “conventional wisdom on Washington is that corporations win every fight and everyone else — particularly the poor — get shafted" is, wait for it, "wrong, or at least incomplete."

He posits that advocates for the poor have increased their influence during the Obama era, pointing to rising food stamp rolls and Obamacare as evidence. His central thesis attacks a straw man:

Corporate America and the poor can both wield a lot of power at the same time, as they’re not typically locked in a zero-sum struggle with each other. If anything, it’s the middle class, or perhaps the upper-middle class, that’s been left out.

Lo and behold, none other than Larry Bartels, author of the definitive Unequal Democracy: The Political Economy of the New Gilded Age, took to the Monkey Cage to rebut Klein, citing this chart: 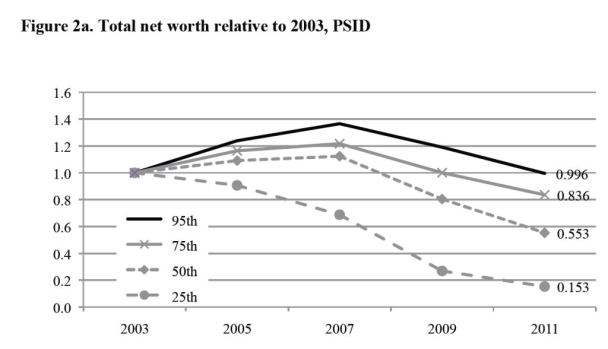 Bartels sees what Klein does not: There’s a larger economic context. Redistributing income, via food stamps or an Obamacare tax increase, is not only insufficient to deal with declining economic prospects, it misses the precipitious rise of poverty in the wake of the recession. Yes, those programs have increased proportionally to need, but the central question seems: Have they increased in proportion to democratic will?

Even if the poor were to exercise the same influence as big corporations, one in three Americans lives in or near poverty now and four out of five will at some point in their lives. That is not an interest group like big business, that’s a huge swath of the country.

There is ample evidence that the poor don’t have the same influence in Washington as the rich. Bartels provides much of it. His model of the responsiveness of Washington to different groups shows that  “the opinions of constituents in the bottom third of the income distribution have no apparent statistical effect on their senators’ roll call votes.” That represents the exact poor or near-poverty interest group that Ezra Klein sees as ascendant. They’re non-existent.

That’s because the poor participate in our political process at much lower rates than the rich. As my colleague Mijin Cha recently wrote of a Journal of Economic Perspectives article (that WonkBlog covered well), not only do the rich donate much, much more to political campaigns:

Klein claims to rebuke to the conventional wisdom of an overwhelmingly influential donor class all the while reinforcing its conservative message. Yet, obviously, even if the interests of the poor were ascendant in Washington, there’s also much less need for policy intervention for the upper-middle class. They’re doing fine.

The conventional wisdom isn’t skewed towards undervaluing the power of the poor. In the wake of Citizens United, the deck remains stacked in favor of the richest Americans and corporations.