Donor-Driven Tax Policy from Government Of, By, and For the 1%

This week, Republicans continue their drive to push through massive tax cuts for the rich, producing headlines such as “Senators Scramble to Advance Tax Bill That Increasingly Rewards Wealthy” in Tuesday’s New York Times:

As Republican leaders pressed for a Senate floor vote this week, there appeared to be little momentum for amendments that would help low-income Americans, which some Republican and many Democratic senators had sought… The Congressional Budget Office said this week that the Senate bill, as written, would hurt workers earning less than $30,000 a year in short order, while delivering benefits to the highest earners throughout the next decade. Those estimates echo other analyses, like that by the Joint Committee on Taxation, which have found the biggest benefits of the bill increasingly flowing to the rich over time.

We know the Trump plan is a giveaway to the rich demanded by big donors, because prominent Republicans have been more candid than usual on the topic.

Back in June, donors from the powerful Koch network were threatening to turn off the spigots if they didn’t see tax cuts flowing, and now several months later party leaders are clearly feeling pressure to deliver.

Representative Chris Collins of New York told a reporter a few weeks ago, “My donors are basically saying, ‘Get it done or don’t ever call me again.’ ” Senator Lindsey Graham said that with a failure to pass a tax cut package, “the financial contributions will stop.” And White House economic advisor Gary Cohn said, “The most excited group out there are big CEOs, about our tax plan.” This is all summed up in a Huffington Post article titled “Republicans Admit that CEOs and Donors Really Need the Tax Cut Bill to Pass – Or Else.”

This “wait, he said that out loud” frankness is unusual in Washington, and builds on the deeper, unspoken ways that money shapes policy. The donor class has sharply different views than the rest of us—especially on economic issues such as tax policy. The general public’s single biggest complaint about the U.S. tax system is that corporations don’t pay their fair share—with 82 percent of Americans saying they are bothered by this. Yet the wealthy feel much differently, and are substantially less likely than the rest of us to believe that the government should generate a lot of revenue from corporate taxes (nearly 40% less likely in one survey).

There is a similar split on individual taxes rates. For the general public, 79 percent are bothered that the wealthy aren’t paying enough. But, $1,000+ donors were much more likely to support the full extension of the Bush tax cuts, even as they were more likely than small donors or non-donors to support spending cuts. 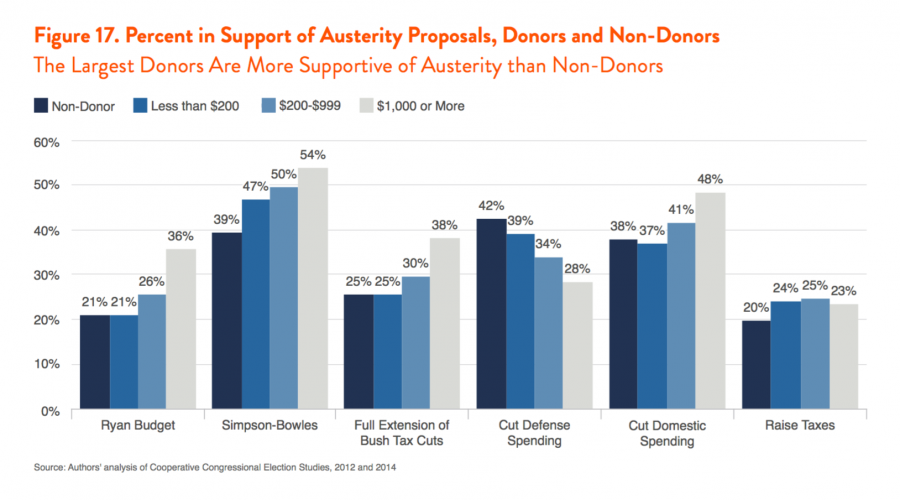 How do wealthy donors translate their preferences into actual policy? Well, we have a system for funding election campaigns designed for exactly that—and we’re witnessing its effect in real time. It's not just explicit demands from billionaires. It’s also that candidates know they have to appeal to the donor class, so are tempted to shade their policy positions accordingly. Those who don’t appeal to the donor-gatekeepers are often filtered out of the process before voters have the chance to make choices at the polls.

The result is a vicious cycle—the rich use their economic might to purchase political power, and then write rules to get even richer, while most Americans struggle to make ends meet.

Donald Trump has taken this to a whole new level by elevating the super-rich to positions of governing power within his administration. People like Gary Cohn and Commerce Secretary Wilbur Ross—not to mention Trump himself—stand to benefit immensely from the proposed tax cuts. As law professor Timothy Kuhner recently wrote, “Plutocracy tends to produce the laws and policies desired by the very rich, offering representation on the basis of constituents’ effective market demand… Kleptocracy, in contrast, cuts out the middle men, the politicians, allowing the wealthy to govern directly.”

Nobel Prize-winning economist Paul Krugman has been consistently critical of the tax plan—how it tilts towards the wealthy with no legitimate economic policy rationale. He concluded a recent New York Times column by connecting the dots to the takeover of our government by wealthy interests and individuals: “So we’re talking about government of the people, not by the people, but by wealthy donors, for wealthy donors. Everyone else hates this plan — and they should.”

The big question in Washington this week is will Republicans—and their donors—get away with it? Will they push through a plan everyone hates to serve corporations and the 1 percent? And will there be any consequences if they do? 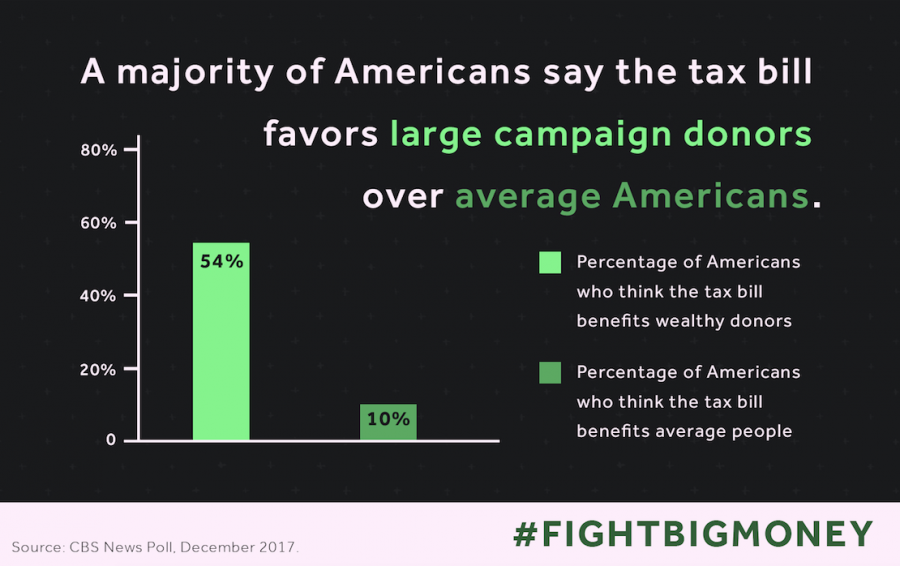