Detroit’s Bankruptcy: A Laboratory to Study Corruption in Municipal Finance

The unprecedented bankruptcy proceedings for Detroit lay bare the witch’s brew of fiscal devastation caused by the Great Recession and poor policy decisions that plague state and local governments throughout the land.

The proceedings also cast a spotlight on the financial shenanigans that have been commonplace in local government financings for decades. Detroit’s Emergency Manager has just proposed a settlement with two banks—UBS and Bank of America/Merrill Lynch—which were responsible for huge derivatives deals gone bad that also includes a provision that could cloak some particularly egregious activities in this arena. If the settlement is approved by the court, the American public may forfeit an important opportunity for reform.

These banks did not simply provide interest rate swaps. UBS was the also “senior managing underwriter” of the infamous 2005 pension funding deal to which the swaps were attached that raised $1.4 billion to fund the city’s future liability to pensioners. And Merrill was in the managing underwriter group.

In negotiated municipal finance deals (i.e. those not sold by competitive bids), managing underwriters do not simply buy the debt at closing for redistribution to investors. Almost always, they are primarily responsible for structuring the deals, often proposing the ideas without solicitation. Outside financial advisors simply advise the municipality of the pros and cons of the structure, to the extent that they are capable and honest enough to do so. Too often, the outside advisors are mere rubber stamps and sometimes even corrupt.

UBS and Merrill very likely were central, if not dominant, players in coming up with the “certificates of participation” structure of the massive deal in 2005. For all the public knows they may have cooked up the idea and sold it to the city administration.

The major impediment in doing the pension deal was that state law imposed a limit on the overall debt the city could take on and the pension financing would push city debt far beyond that limit. Instead of issuing conventional bonds, the city, through the underwriters, sold certificates that entitled purchasers to pro-rata percentages of a manufactured cash flow that the city promised to pay. Here is the actual structure: 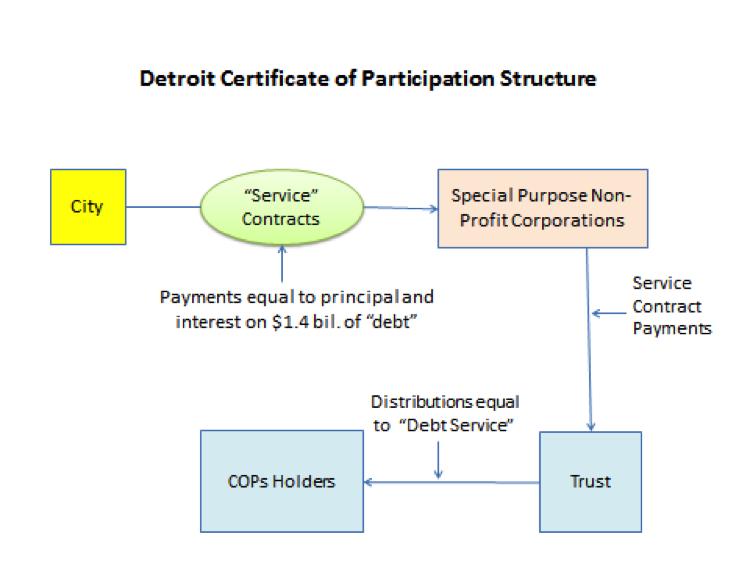 Why did the city opt for this complex structure? It was an attempt to avoid the legal debt limit. And now the Emergency Manager has brought suit to have the transaction voided as a subterfuge. This is seen by the financial sector as a real threat. The idea of state and local governments becoming emboldened to void existing transactions rattles the banks who have participated in sketchy deals designed to avoid pesky laws.

The banks have warned that, if the city is successful, many certificates of participation deals around the country will be called into question. In fact, many do exist. But most (perhaps all) of these transactions were done for very different reasons.

The synthetic “interest” on these other COPs deals is exempt from federal income taxation, and therefore is lower. The municipalities involved were bestowing the benefit of lower interest rates as a form of subsidy, borne by the Federal Government, to attract business development. The municipalities were technically obligated to pay so that the tax exemption applied, but only from the funds generated by a lease or other contract with the private company that was being incented to invest. If the company failed to pay, the municipality did not have to. Therefore, the municipal taxpayers were not at risk for a default. These deals were not artifices to avoid legal debt limits.

If, indeed, there are existing COPs deals by other municipalities structured to substantively avoid debt limits, they deserve careful legal scrutiny. After all, if they are treated as if they were real municipal debt, debt limits would be meaningless.

If the city is successful in its suit, the COPs holders would not be paid back. But let’s assume that the banks were responsible for the entire idea. Even if the prior Detroit administration is to blame, so are the banks if they created the structure or participated in its design, far more so than the COPs holders.

But the city has not gone after the banks. In fact, in its recent proposed settlement of the related derivatives transactions, it has agreed not to sue UBS or Merrill for their roles in the COPs deal. The two banks must have considered liability for the COPs a real possibility since they bargained for this release. Now the bankruptcy court must consider whether the Emergency Manager was wise to have given this right away.

The entire American public would benefit if the bankruptcy court rejected the settlement and the banks were found liable for their role in the COPs deal. While various federal regulators have paid lip service to cleaning up the municipal finance business, it remains a source of sharp dealing and corruption, costing cash-strapped state and local governments and their citizens enormous sums. If this means that the financial sector has to fear that deals can be voided if they subverted laws designed to protect the public, or if they were bought about through corrupt practices, maybe the banks will hesitate when they are next tempted to make those deals.