The recent Martin Gilens and Benjamin Page paper finding that ordinary citizens have, “little or no independent influence on policy at all.” While the paper was covered extensively in the popular press, few bothered to even read the paper which notes, “ the preferences of average citizens are positively and fairly highly correlated, across issues, with the preferences of economic elites.” Gilens’s data look at only those in the top 10% making about $146,000 a year. It’s likely that the superwealthy in the donor class have far different interests, which is suggested by other research by Page, Larry Bartels and Jason Seawright. It is in the top 1% and above where there is a motive for rent-seeking and evidence of it.

The more important finding from the Gilens/Page paper is the influence of interest groups. The authors note that: “Interest group alignments are almost totally unrelated to the preferences of average citizens.” The chart below shows the correlation of different groups with those of the middle class and the group’s influence over policy. We can see that economic elites have more influence on policymaking, but also a stronger correlation with the middle class. Far more disturbing are business interests, which have large amounts of influence, but whose policy preferences differ markedly from the middle class (although there are still caveats). 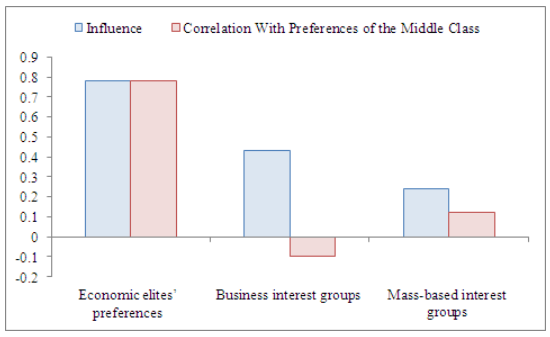 It’s important to note that the “mass based interest groups” include groups like the National Rifle Association and American Israel Public Affairs Committee which do not share the interests of average citizens. At the same time, one corporate lobbying organization, the American Hospital Association, is actually slightly correlated with the interests of average Americans. To parse out which groups are aligned with the preferences of Americans and which are positively malign, I used data from Gilens’s book Affluence and Influence. I stuck to groups which had at least one statistically significant correlation (either positive or negative) with one group of voters (10th percentile, 50th percentile and 90th percentile). This comparison yields some interesting results. First, we can see that most unions actually take positions that strongly correlate with the preferences of all Americans, although the correlation is stronger for the lower and middle class. 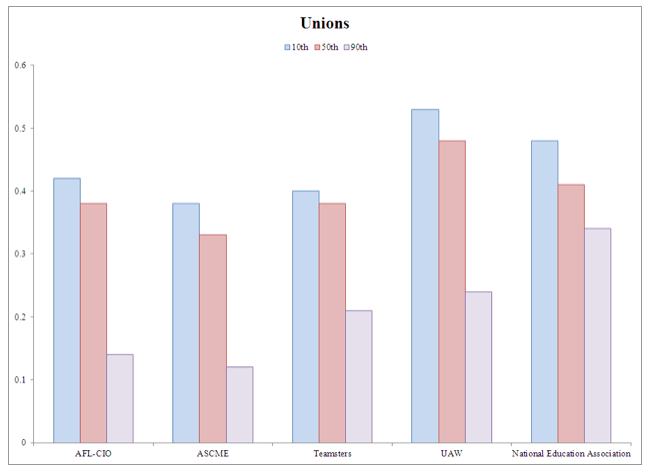 Second, we can see that corporate lobbying groups do not, with one exception. 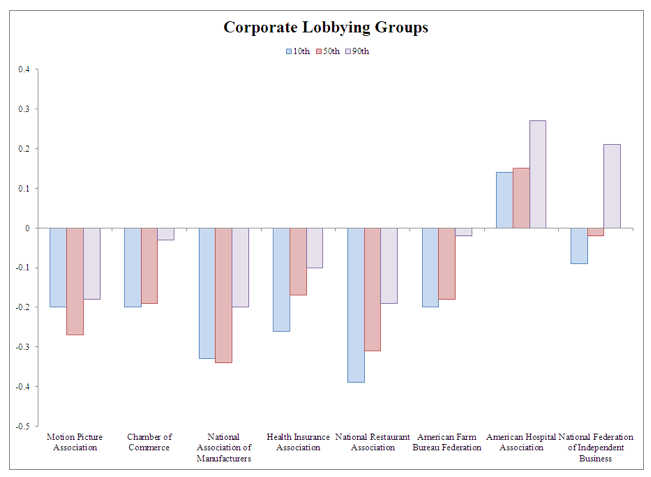 Corporations also push policies that do not share the support most Americans. 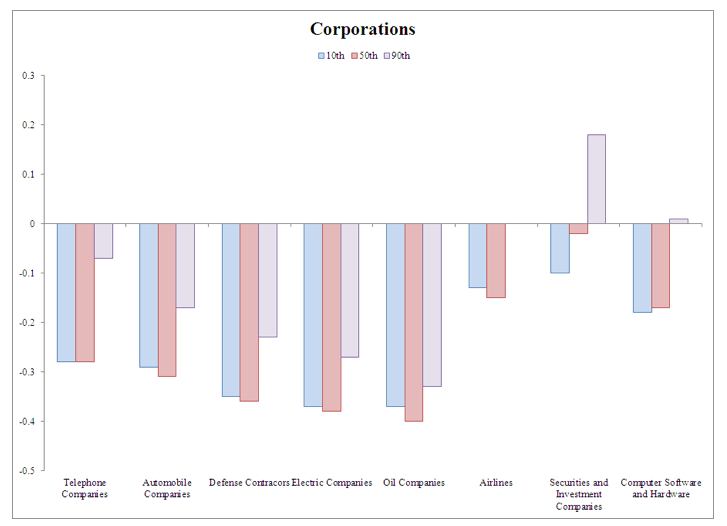 Other lobbying groups differ. The wealthy tend to be more socially liberal than the poor and middle class, which explains the divergence of religious organizations. The NRA enjoys little overlap with the public, while AARP is generally a force working in favor of the preferences of most Americans. 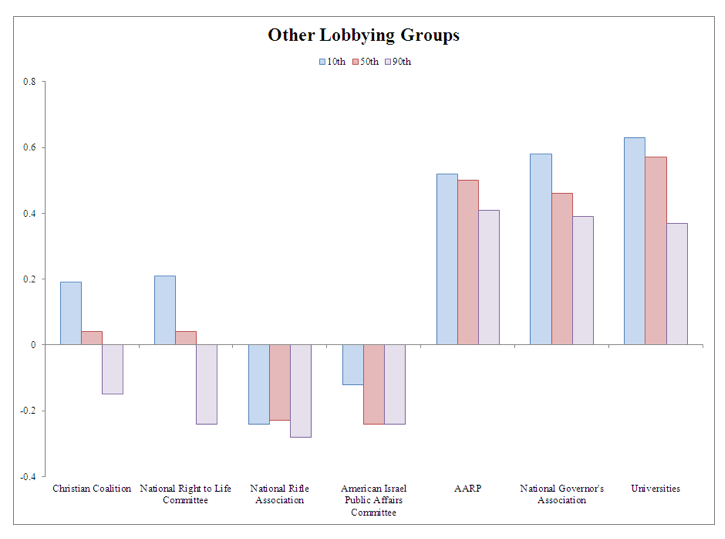 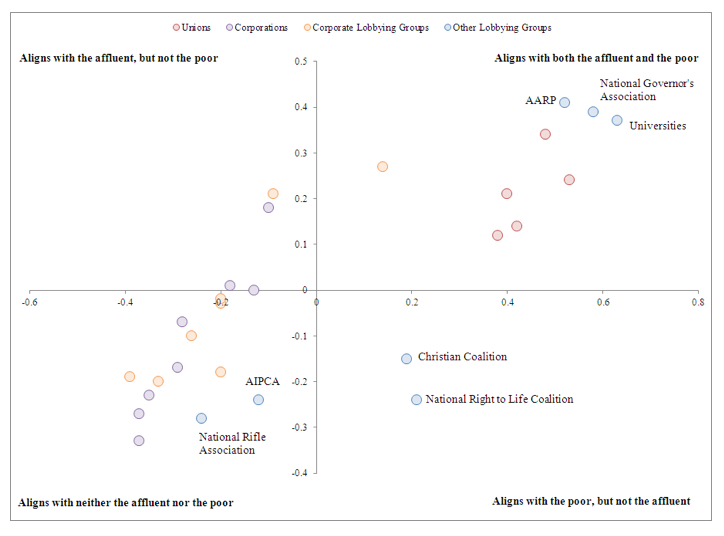 Finally, I show how well the various groups correlate with the middle class on another chart below. We see the same result. 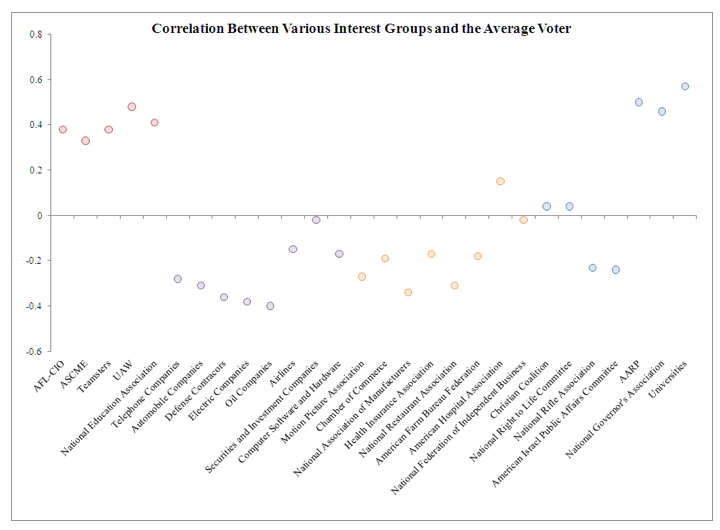 This makes a preliminary case for focusing on corporate lobbying in order to make policymaking match the preferences of Americans. There are some caveats. It’s difficult to tell how well preferences match interests. Gilens notes in an essay for Boston Review that Johnson’s Great Society was actually a low in terms of voter preference:

the majority of Americans were opposed to many of the other domestic programs of the Johnson years. The Great Society and the War on Poverty were not responses to an upwelling of public concern for the disadvantaged or a desire to expand the role of government in addressing social needs…

In contrast, the Iraq War represents a high:

At least at first, the Afghanistan and Iraq wars and Bush anti-terrorism policies had widespread public backing. The administration also enjoyed support from Americans at all income levels for the Medicare drug benefit, No Child Left Behind (a long-standing Democratic agenda item on which Bush partnered with Senator Ted Kennedy), and the faith-based social services initiative. New federal regulations on funding stem cell research matched public sentiments. The income tax cuts and estate tax repeal adopted in 2001 and 2003 were supported by majorities of Americans at all income levels even though they clearly provided the greatest benefits to those at the top.

Further, Gilens’s data are dated—the most recent are from 2002, before Citizens United, but after along with the rise of inequality. I’ve suggested that this means we should focus on corporate interests, but there is still a strong possibility that the 1% have very different interests than the middle class and 90th percentile (data from the Cooperative Congressional Election Study indicate that the 1% has interests more similar to the 90th percentile than average voters). Adam Bonica argues that the wealthy and corporations tend to donate in a bipartisan or moderate fashion. This does not suggest they share the interests of Americans, but rather that they are attempting to buy influence. Corporations aim to change policy - the best way to do that is to sprinkle donations across party lines. Far more important are their aims, which the data suggest may not be broadly in line with those of average Americans.

We should aim to reduce the influence of money as much as possible. However the data suggest Nietzsche may have been onto something when he said, “In individuals, insanity is rare; but in groups, parties, nations and epochs, it is the rule.” While most Americans have broadly similar preferences, most corporate interest groups are fighting for an agenda that benefits only them.