Climate Change and The People’s Budget: Making the Right Choices for People and the Planet

Investing in a rapid transition to 100% renewable energy and clean transportation, while protecting environmentally vulnerable communities from the worst effects of climate change, comprise what is arguably the most important fiscal choice we have to make as a country over the next decade. As described in the Demos report The Price Tag of Being Young: Climate Change and Millennials’ Economic Future (co-authored with NextGen Climate Action), climate change is already impacting our communities and economy in serious ways, and the impacts are accelerating. Since 2000, we’ve experienced 15 of the 16 hottest years on record. As of 2016, the previous 8 years each brought more than $10 billion in damages from extreme weather. In Pennsylvania and Ohio alone, pollution from burning coal and gas was estimated to have caused 4,400 deaths and $38 billion in health costs in 2015. By 2030, damages from a single hurricane hitting Florida could reach as high as $640 billion. Other impacts include heat waves, drought, poorer air quality, increased infectious disease rates, declining agricultural productivity, more frequent and intensive wildfires, and much more.

This is not just an environmental crisis. Climate change is an integral part of our country’s other major systemic crisis—the crisis of growing inequality, especially in the form of racial segregation. Climate change impacts will hit communities of color and low-income communities harder than in other places, because these communities have fewer resources to protect themselves and they are already the most exposed to the negative environmental and health impacts of burning fossil fuels. One in 7 black children has asthma, for example, due in part to high levels of transportation pollution and other types of pollution in many communities of color. The asthma rate for black children is nearly twice that of white children.

As we examine in the Price Tag report, there is another type of inequality at stake in the climate crisis—generational inequality. Without strong action on climate change, by 2100 U.S. per-capita GDP will shrink by 36 percent relative to a world without climate change, according to researchers at Stanford and Berkeley. For a median earner who is born in 2015, that means $581,000 in lost wealth over her lifetime. The same person with a college degree will lose approximately $764,000 in lifetime wealth due to climate change. 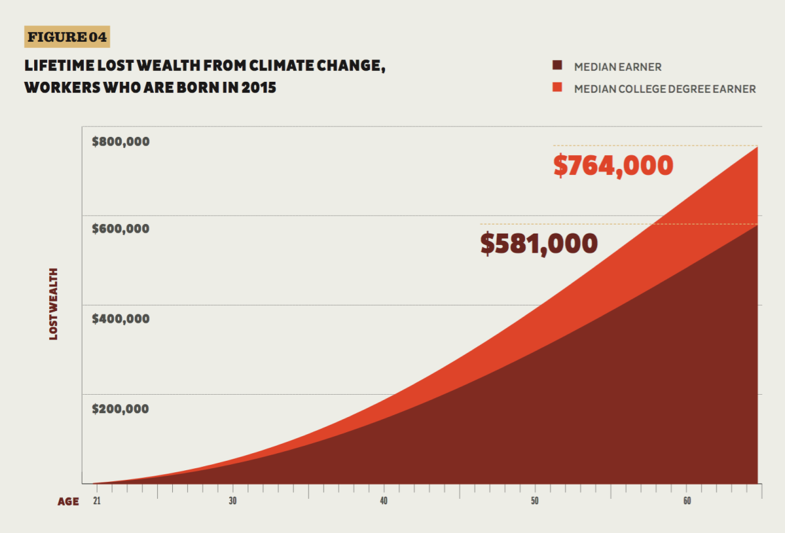 Averting such losses is reason enough to invest in aggressive emissions reduction goals, through energy efficiency upgrades, clean energy, and clean transportation. But failing to do so is a terrible idea for other reasons as well. The most important is that investment in a clean energy transition will create jobs. According to ICF International, achieving an 80 percent reduction in greenhouse gas emissions by 2050 will generate $800 billion in new investment, nearly 2 million net new jobs, and approximately $290 billion in additional GDP. Further, since the economic value of coal is less than the health costs and other pollution damages associated with burning coal, lower health costs will be another large net benefit of clean energy investment.

It can’t be overstated how fraught with risk the federal budget is when it comes to climate change. Thankfully, we have the Congressional Progressive Caucus’s People's Budget to set us in the right direction. A tax-and-spending framework that boldly makes the right choices for people and the planet, it is anchored in a proposed 10-year, $2 trillion investment in energy, transportation, and water infrastructure, financed in part by a per-barrel fee on oil. A smaller but essential piece of the People’s Budget is increasing the EPA’s Superfund spending on environmental cleanups by $22 billion, to be financed by new excise taxes. Federal subsidies for fossil fuels, on the other hand, would be sharply curtailed.

The People’s Budget also tackles climate change head-on with a carbon tax that makes polluters pay for the clean economy transition and rebates 25 percent of carbon tax revenue back to energy-burdened low-income households. The carbon tax will generate approximately $760 billion over 10 years, in addition to the revenue spent on rebates.  It should be noted that while highly targeted rebates may be necessary to offset transitionally higher energy costs for some households, direct investment of a large share of the carbon revenue in energy efficiency and clean energy projects in low-income communities could bring greater and longer-term benefits by creating good jobs, generating substantial energy savings, and improving community health, while also accelerating emissions reductions. The People’s Budget should place more emphasis on investing carbon pricing revenue directly in low-income communities that need investment the most. A highly-targeted, investment-centered approach is already getting traction at the state level, led by strong multi-sectoral, multi-racial coalitions like NY Renews.

The People’s Budget stands in polar opposition to President Trump’s proposed budgetary assault on environmental protection and climate policy, which is centered on a $2.6 billion, 31 percent cut to the Environmental Protection Agency. Such a drastic cut in funding and the resulting decimation of EPA staff—by one-fifth—will effectively destroy many of the EPA’s most important functions. Among other specifics, Trump proposes to eliminate funding for the implementation of President Obama’s Clean Power Plan, effectively killing the plan without having to legally repeal it, which he is also attempting to do. Other targeted cuts—to the Agency’s radon program, to the Great Lakes Restoration Initiative, and to the Office of Chemical Safety and Pollution Prevention, will do great harm to public health. Overall, even larger impacts will be felt as major environmental statutes such as the Clean Air Act are rendered virtually unenforceable, effectively repealing the laws.

The malign insanity of Trump’s assault on the EPA is underscored by the very effectiveness of our major environmental laws. The Clean Air Act may be the most cost-effective policy in U.S. history, generating approximately $2 trillion in health and other benefits between 1990 and 2020, with compliance costs amounting to only about $65 billion over the same period. The fact that Trump’s proposed environmental cuts are nearly 9 times greater than those proposed by the Republicans in Congress last year further underscores the madness of Trump’s crusade against environmental protection. Fortunately, we have the People’s Budget to give us some light at the end of the tunnel, however far away that light may seem right now.