Citi’s Settlement: A Drop in the Ocean

Citibank settled the Justice Department’s mortgage market investigation yesterday, agreeing to pay $4 billion in civil penalties, $500 million in penalties to various states and $2.5 billion in “soft dollars” to aid consumers damaged by their pre-financial crisis shenanigans. To reach agreement, the bank was also absolved of any liability for credit default obligations, derivatives that fueled the crisis. Attorney General Holder offered up a verbal slap to the face, writing, “the bank’s conduct was egregious.”

So why did Citigroup share prices close 3.1% higher on the market?

One obvious answer is that after taxes, the cost to Citigroup is more like $3.8 billion, meaning that $3.2 billion is paid by the American taxpayer. But even disregarding this fact, the outcome is fairly good for Citibank.

The financial crisis that turned a cyclical downturn into the Great Recession generates numbers that we can barely comprehend. However, a casual review of the consequences of the crisis makes it clear that this settlement, and especially the consumer aid portion, is absurdly meager in the greater scheme of things.

Lets start with the homeowners who were duped into participating in the real estate bubble in order to maintain their standards of living as wages stagnated and income and wealth disparity skyrocketed. At its height, the aggregate amount of negative equity (the excess of mortgage debt over property value) exceeded $715 billion. These “negative assets” were disproportionately borne by poorer and minority families, with over $230 billion associated with properties valued at $200,000 or less. Despite the glacial recovery of the economy, the aggregate negative asset value was still about $400 billion at the end of last year.

Will $2.5 billion make a real difference, assuming that it is deployed in the best interest of consumers? The answer is obviously “no.”

But more broadly, did Citibank suffer consequences commensurate with the damage that it wrought? To answer this, we must reflect on a similar $13 billion ($7.7 billion after tax) settlement that was reached with JP Morgan Chase only a few months ago. Jamie Dimon’s outfit paid $2 billion in penalties,  $6 billion to various federal agencies, $4 billion in consumer aid and various amounts to several states. Using the same model of culpability to calculate damages, Citibank made an initial offer of $360 million. That indicates that JP Morgan Chase got off even lighter than Citi.

But all of these numbers taken together do not rise to the level of anything close to justice. Underwater amounts are massive, but they come no where near telling the story of how much harm these banks did to the American public by precipitating the crisis and the Great Recession. In fact, we are still experiencing the harm and will continue to do so for many years to come.

The GDP is currently 10% lower than it would be had pre-crisis projections been realized. That means that we are producing $1.7 trillion less than the projections indicated we should be just this year. That $1.7 trillion annually translates almost completely into the incomes of the 99% of Americans who do not happen to be the super wealthy. And it falls most damagingly on the minority families that disproportionately make up the lower income echelons.

The real damage is reflected in the following chart produced by the Atlanta Federal Reserve Bank. Even optimistic forecasts indicate that the real damage of the crisis will cost the American public almost $12 trillion. The actual cost will take at least another decade to play out and could be much, much higher. 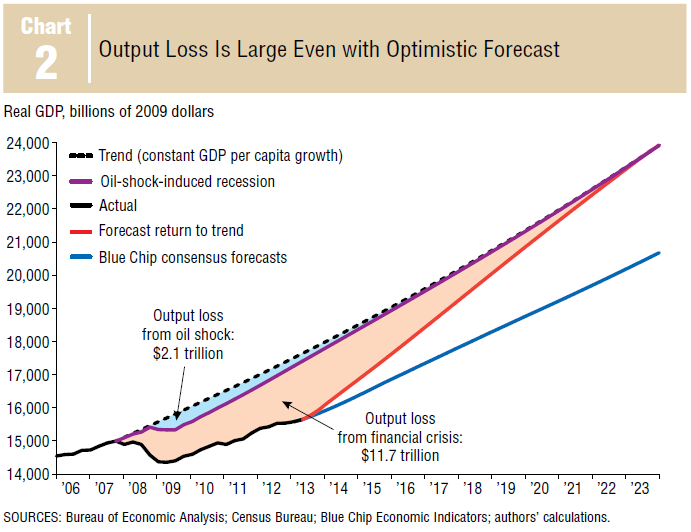 No, justice cannot be served by settlements that minimally harm the profitability of the banks. As big as the biggest banks are, they could not withstand amounts that truly compensate the public. And that is why the whole approach to the crisis was flawed from the beginning. The banking system had to be saved from collapse. But the banks themselves, as represented by shareholders and by the bonus-earning management, should not have been saved.

But even more shamefully, the whole corrupt system continues to gouge the public. New York University Economics Professor Thomas Philippon has estimated that the financial sector causes a “misallocation of resources” in the amount of $280 billion each year. This is a polite way of referring to skimming profit from the system to the detriment of everyone else. It is an ongoing drain on the well-being of the American public that should not be tolerated. That profit translates into $3-4 trillion of incremental value of the financial sector. No wonder stock prices go up with every settlement.

This drain on the economy is also the very source of the problems that caused the crisis, depresses growth and facilitates the disparity of incomes and wealth that distorts the economy still. The only way to remedy this is to shrink the financial sector so that it serves the public’s interests rather than those of the super wealthy.

Even if we lost the opportunity to receive get justice, can we at least cut out the cancer that caused the harm in the first place? And can we do it before the financial sector drives the vast majority of Americans into the ground, either in one fell swoop through another crisis or over time by draining the public’s wealth year after year?