Cities Are Growing Faster Than Suburbs. And That is Good. 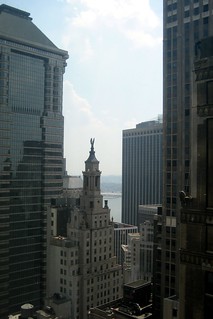 For the first time in nearly 100 years, cities are growing faster than the suburbs. That is the finding of new Census data, released today.

Is this good news or bad news?

One explanation for the shift is that young homeowners can't get enough money together amid hard economic times to buy a home, so they are stuck renting -- and rental units are more likely to be in the city. More broadly, an epidemic of foreclosures and the decline of home ownership has pushed people out of the suburbs and back to the cities.

None of that is anything to cheer.

But there is another, more positive explanation of what is happening: Americans are increasingly choosing to live in cities for lifestyle reasons and a longer term shift in the culture is underway that signals the decline of the 'burbs.

If that is true, it would be a good thing. Cities make a lot more sense in an age of climate change, rising energy prices, an obesity epidemic, and widespread loneliness.

Let's just run down that list. Not only do urban residents drive much less, but they tend to live in smaller, more energy efficient dwellings and have a lower carbon footprint overall. As the NRDC has reported, for example, the "average New Yorker’s energy consumption and carbon emissions are about one quarter of that of the average American."

So the more people who live in cities, the better chance the U.S. has of controlling its carbon output. Insulating Americans from energy volatility is no small thing, either. New Yorkers don't tend to pay much attention to rising gas prices because it doesn't affect them -- $5 at the pump is just another news story to tune out.

City living is no automatic cure for obesity, which tends to track closely with socioeconomic status. New York City has obesity rates close to the national average, as do some other major cities. Still, overall, urban residents are less obese even when controlling for income and education. The reasons are obvious: city people walk more, and even a modest amount of physical activity can reduce chances of becoming obese.

So here again, getting more people to live in cities would be a good thing, translating into a healthier population and reduced healthcare spending.

As for loneliness, urban living is no automatic cure for this, either. Urban settings can produce anomie, while people can find tight knit communities in the suburbs. But rates of loneliness have more than doubled over the past quarter century and the increasingly dispersed nature of communities is surely one reason why.

To the extent that a re-urbanization of America would reverse rising social isolation, that's one more reason to cheer for cities.

Of course, though, we need to do more than just cheer for particular lifestyle choices. The U.S. needs to craft public policy to support cities over suburbs. That is easy to do, at least in theory. The suburbs have been favored by decades of friendly public policy -- like the home mortgage interest deduction and hefty support for roads and highway. The cities, with far less political clout, have struggled to maintain public spending on mass transit and urban development.

Reversing these priorities would help nurture the move back to cities. A carbon tax, affecting both gas and home heating fuel, would be another important step.

Where Americans live is not some natural evolution. We can shape migration with policy, and favoring the cities makes a lot of sense.