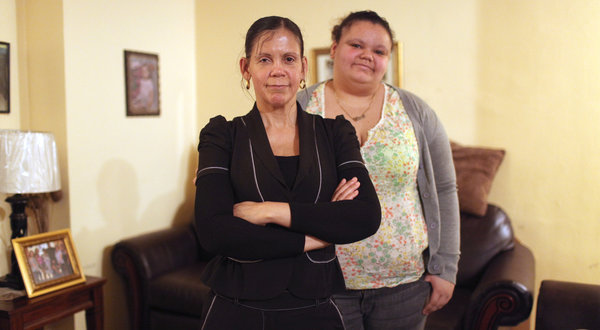 With four job seekers for every single job opening the last thing unemployed Americans need is a hidden barrier standing between them and essential job opportunities. Yet for many, such a barrier exists in the form of an employment credit check -- a hidden obstacle because job applicants may never find out that it is the reason they are denied employment.  The New York Times tells the story of one Queens mother who ran straight into the credit check roadblock.

After nearly two years looking for work, former laundromat manager Maria Ortiz (Photo above. Cr) sought assistance from a non-profit organization that helped her with her resume and sent her out on job interviews:

“Some of [the interviews], I thought I had experience in what they were asking for, but they would call me and tell me no.”

Ms. Ortiz was baffled by the repeated rejections until her caseworker checked her credit report. Everything made sense then: it showed that damaging, faulty information had been added to her report.

Quickly realizing that she needed to correct the false information, Ms. Ortiz and her caseworker sent letters to more than 20 companies and the credit bureaus to set straight which debts were veritably hers.

Even after extensive effort with the assistance of a professional caseworker, Ortiz was turned down for a bank teller position when false information she thought she had corrected reappeared on the employment credit report.

The Times tells Ms. Ortiz’s story as a happy one -- she ultimately succeeded in landing a full-time job. But her ordeal illustrates some of the problems inherent in using personal credit history as an employment screening tool -- a practice that six out of ten employers now utilize for some or all hiring decisions.

First, consider the errors in Ms. Ortiz credit report, which are not out of the ordinary.  A 2008 Federal Trade Commission-sponsored pilot study concluded that about 31 percent of people who reviewed their credit report found some type of error. Even a study funded by the credit reporting industry itself found that more than 20 million Americans could identify material errors in their credit reports.

Compounding the problem with credit report errors is the reality that many job seekers may not find out that a substandard credit report is the reason they are being denied work. While the Fair Credit Reporting Act requires disclosure of an adverse employment decision made on the basis of credit information, reports suggest that most employers don’t bother. As a result, job seekers like Ms. Ortiz may never realize that a credit report -- erroneous or otherwise -- is the reason they can’t find work. Ms. Ortiz will never know how many of the other jobs she applied for over the course of two years searching for work fell through only because of mistakes on her credit report.

It’s easy to add the advice to check credit reports and address any errors to the long list of other recommendations given to job applicants. But notice how this puts a new burden on an individual already struggling to find work -- now they must also correspond with dozens of companies to fix a mistake made by a corporation they never asked to gather and sell their personal information in the first place. And this “solution” doesn’t touch on the larger problem of unemployed job seekers who genuinely have poor credit because months without a job have made it difficult for them to keep up with their bills.

The better solution? Ban employment credit checks altogether. As I’ve argued in the past, employment credit checks have a discriminatory impact and aren’t reliable for making hiring decisions. A strong law, like the Credit Privacy in Employment Act currently before the New York State legislature (sponsored by State Senator Jeffrey Klein and Assemblyman Eric Stevenson) could save New Yorkers in Ms. Ortiz’s position a world of trouble. Other states that haven’t already taken action should follow suit.