In response to a declining voter turnout rate, California recently implemented big reforms to help boost the turnout rate: online registration, same day registration (SDR), and relaxing the vote by mail deadline. A recent report by the Public Policy Institute of California analyzed the impact of the changes and claims that while online registration and the relaxed vote by mail deadline were worthwhile reforms, SDR might not be. The SDR analysis in the PPIC report, however, is flawed in fundamental ways that negate its conclusions about SDR.

For starters, there are serious issues with the methodology of the report. As Barry Burden, a leading academic on SDR, wrote to me in an email about the PPIC report:

Skeptical readers of the report should ask more questions about the methodology. The appendix does not provide sufficient detail about how the analysis was done. It's not even clear which states are categorized as having SDR. Table B3 has only 12 observations (6 states across 2 years) but includes 7 independent variables. That is not sound scientific practice.

Indeed, many of the conclusions about SDR in the PPIC report are counter to well-established research. SDR’s positive impact on voter turnout is not just an academic conclusion, it is a time tested reality. In the 2012 election, voter turnout in states with SDR was on average 10 points higher than in states without SDR, as seen below. 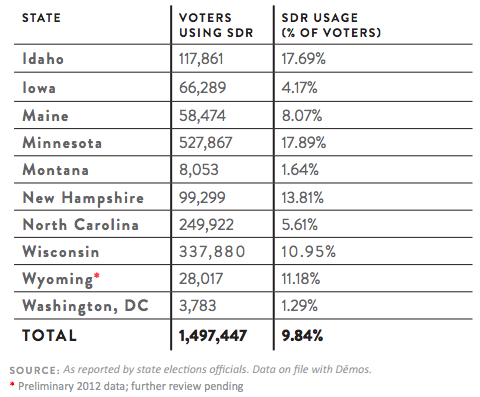 The PPIC report claims that previous SDR states were more homogenous than California, and accordingly it could not be determined whether a more diverse state such as California would see gains in turnout similar to those in earlier SDR states. Unfortunately, the authors excluded from their analysis two examples that have very diverse populations and had implemented SDR—North Carolina in 2008 and Washington, DC in 2010.

In North Carolina, though they represented only 20 percent of the voting-age population, African Americans comprised 36 percent of those who used SDR to vote in the 2008 presidential election in North Carolina, the first such election when SDR was available there. By omitting from its statistical analysis the two most diverse jurisdictions that use SDR, PPIC’s conclusion is deeply flawed.  (As an aside, the high rate of SDR usage among African Americans in North Carolina makes it even more distressing that the state has since repealed its SDR law.)

The potential of SDR to increase turnout of underrepresented communities strongly supports  its implementation. As Lisa Garcia Bedolla, who researches how technology can increase voter turnout among underrepresented populations wrote in an email to me:

We know little about how SDR would affect particular populations within California -- youth, Latinos, and Asian Americans -- for whom there is a significant registration gap. Given registration remains a significant barrier for these eligible voters, there is every reason to assume the impact of SDR would be much greater for them and would therefore make the California electorate much more reflective of the state's population.

[i]t seems reasonable to conclude that the reform has done little or nothing to boost turnout in most of the states that adopted it. The findings were similar for key subgroups, including the young, those who recently moved, and those without a high school diploma

This conclusion is contradicted by well-established research, which shows that SDR is highly beneficial for turnout. In particular, some research predicts SDR could boost youth turnout up to 14 percent. In fact, SDR is particularly helpful for people who have recently moved because eligible voters can show up at their new polling place and re-register to vote and vote with SDR. As young people move more often than average Americans, SDR is particularly beneficial for them.

On the cost issue, the PPIC report seems to contradict itself when it states:

This system will probably boost turnout a few percentage points. But a substantial number of people may take advantage of same-day registration, which could result in significant costs and complications for county registrars.

This (the administrative burden) has been the argument against adopting EDR and SDR in many states. The report actually has no evidence how burdensome SDR would be. It's true that 30,000 "late registrations" would be a lot in many jurisdictions, but LA County's 10 million people would make it the 8th largest state, so 30,000 is a small share of the electorate. By way of comparison, Wisconsin only has 5 million people but somehow managed to process over 400,000 EDRs in November 2008. The report doesn't provide this important context.

In addition, Demos’ research found that clerks that currently administer SDR do not see it as a burden. Iowa and North Carolina reported minimal costs when introducing SDR in the 2008 presidential election.  The state of Iowa spent less than $40,000 to introduce SDR for its 99 counties.  North Carolina’s counties cited some additional staffing needs at voting sites as the most notable expense associated with Same Day Registration.

It is not just newly implemented programs that are cost effective. In a telephone survey conducted by Demos of local election officials in states with the longest experience with SDR—Idaho, Maine, Minnesota, New Hampshire, Wisconsin, and Wyoming—most respondents described the incremental cost of SDR as “minimal.”  Whatever costs arose were offset by savings from reducing the number of provisional ballots needed and reducing staff costs associated with last-minute processing of registrations just before the pre-election deadline.

The PPIC report fails to make the case that SDR would not be worth implementing. And, even if the increased turnout rates are as low as they predict, a 3 to 4 percent increase in a state as large as California would still mean hundreds of thousands of additional eligible voters could participate in our democratic process.  Seems like a worthwhile investment to me.