How would the 2012 election be different if many more young, poor and minority citizens paricipated? We would find out if we were to modernize our elections system. In most parts of the country, our elections system is stuck in the 19th century. Often intentionally, the patchwork of laws at the state and local level makes it difficult for voters to know how, when, and where to register.

A new report by Youjin Kim, “Democracy in a Mobile America,” highlights the impact of our inflexible registration laws on eligible voters who move after their initial registration, either in-state or out. Kim finds that there are “10 to 14 thousand different ways elections are administered in this country," making the process both confusing and undemocratic for eligible voters that move.

The result? In 2008, “4 to 5 million [eligible voters] were not registered due to administrative procedures and approximately 4 million registered voters were prevented from voting due to administrative problems." Further, moving dampened turnout. Kim finds “less than 70% of eligible voters who lived at their current address for less than a year were registered to vote, compared to 85% of those who have lived at their current address for five years or more.” 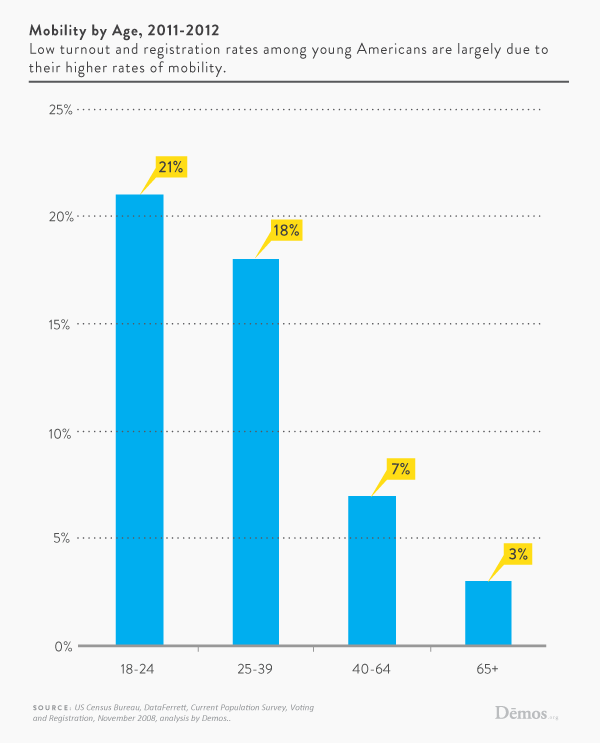 Unlike many of our nation’s entrenched institutional problems, election law has simple and common sense solutions. Other states should follow California’s lead and enact same day voter registration, empowering mobile voters to regain easy access to the ballot.  If not, they should at least enact a more modern voter registration system to electronically account for changes in address. Voters shouldn’t be forced to fill out more forms due to bureaucratic ineptitude.

Public assistance agencies should follow Section 7 of the National Voting Rights Act and offer voter registration services much like the DMV. There’s ample evidence that the “Motor Voter” law, making the DMV offer registration forms, has been a resounding success at improving access to the democratic process by underrepresented groups. Finally, voters who move within their own county should be allowed to vote at their old polling place if they haven’t been informed of the change

When eligible voters are denied access to the ballot by inept or irresponsive bureaucracy, our democracy suffers.