Building an Inclusive Democracy from the Grassroots Up

Carol Lautier, Ph.D.
Laura Williamson
Learn why the 6 policies of our Inclusive Democracy Agenda are critical to building power in Black and brown communities and how organizers are fighting to protect and strengthen our democracy.
Image
Democratic Reform
Money in Politics
Voting Rights & Access

On Tuesday, April 27, Demos convened leaders in the Inclusive Democracy Project to discuss the much-needed policies we recently released as part of our Inclusive Democracy Agenda and to hear about the ways Black and brown communities across the country are building power and fighting back to advance a more inclusive democracy. 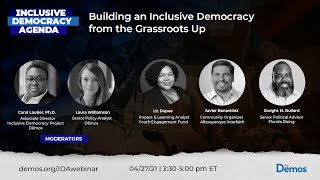 Moderated by Demos’ Carol Lautier, Ph.D., Associate Director, Inclusive Democracy Project, and Laura Williamson, Senior Policy Analyst, the conversation stressed the need to advance a bold and unapologetic agenda now so that we can make strides toward the multiracial, inclusive democracy we have always envisioned but never fully achieved. Our panelists, all partners in Demos’ Inclusive Democracy Project, brought a breadth of experience and expertise in democracy building to the discussion and shared stories about the fight for justice alongside communities across the country.

Javier Benavidez, an Organizer at Albuquerque Interfaith, spoke about the Democracy Dollars campaign he helped lead and about the outlook for building a small donor democracy in New Mexico. Javier also described the years of organizing and power building that have led to a more progressive legislature in Santa Fe, and, subsequently, a series of major victories for working people this year. He also discussed  the obstacles that remain to building and maintaining durable power for Black and Brown communities in New Mexico, and what we can do next.

Liz Dupee, who is the Impact & Learning Analyst at the Youth Engagement Fund, shared her perspective on why universal voter registration is a critical step in achieving the kind of democracy she and her community envision: “Everybody voting. People wanting to participate beyond the vote. A government you actually want to get involved with - not something you want to reform, something you actually want to work with. And an actual say in how our government runs and our society functions.”  She also emphasized how imperative it is that our campaigns center the leadership of directly-impacted people, through which we can push the bounds of what’s possible, win, and build power for future fights.

Dwight Bullard, the Senior Political Advisor at Florida Rising, spoke about the relationship between the right to vote, Black and brown political power, and the long, hard work of building an inclusive democracy in Florida. He educated the audience about HB1, Florida’s wide-reaching new censorship and repression bill, and how we should understand this law in the context of the struggle to build a more inclusive democracy. And he stressed how important the project of envisioning and effectuating a truly multiracial democracy is to all the other fights we’re in, from protecting against evictions and pushing for affordable housing to the movement for safe communities without over-policing and militarization.

All three panelists emphasized the need to engage in a fundamental re-imagining of what an expansive, inclusive democracy looks like and of what it will take to get there. They pointed to the leadership of the people who have been written out of that democracy since the beginning: Black and brown people, who are charting a course for a different kind of democracy all across the country, from Florida to New Mexico to Washington state and everywhere in between.

Demos’ Inclusive Democracy Agenda was born in this spirit: the charge to dream big and to move boldly to build power to win. We will continue to work with the leaders of the Inclusive Democracy Project as they develop and fight for their visions for our democracy -- and for the policies they know we need to get there.

How a Lack of Democracy Worsened the Texas Storm Disaster

The winter storm disaster in Texas was a crisis fueled by a failure to address climate change and the influence of oil and gas companies in state and local politics.
Blog
Amy Traub
Image

To Keep His Promises to the Black Community, Pres. Biden Must Prioritize Building an Inclusive Democracy

While Biden inspires hope, our democracy has let down Black communities for far too long.
Blog
Joshua Harmon
Image

A Look Back at the Other Swing Voter: Visioning Forward Convening

Demos and Boston University’s Center for Antiracist Research hosted a virtual convening to contribute to a growing movement that seeks to redefine who we think of as swing voters.
Blog
Christelle Prophete
Laura Williamson