Mark Huelsman
Bloomberg has quietly begun to roll out a series of policy proposals, and this week, it was higher education’s turn. His plan says a lot about where consensus currently is—and where it is not.
Image
Debt-Free College

Last night, Michael Bloomberg graced the debate stage for the first time this primary season, and the former Mayor was inundated with questions on his record, from policy (namely the racist stop-and-frisk regime he oversaw in New York City) to personal (from his tax returns to the unknown number of Non-Disclosure Agreements signed by former colleagues).

These were necessary and urgent questions, but the debate was not expected to focus on the plutocratic former Mayor’s policy platform. That said, the cartoonishly well-resourced Bloomberg campaign has quietly begun to roll out a series of policy proposals over the past month. This week, it was higher education’s turn. And, while the plan didn’t get a star turn at the debate, it says a lot about where consensus currently is – and is not – building around affordability and debt.

In some ways, the Bloomberg plan reflects progressive orthodoxy on college affordability. Bloomberg would work toward a federal-state partnership that expands public investment in public colleges, and guarantee tuition-free community college for all. In addition, the plan would double the maximum Pell Grant, work to cover living costs and food, and make sure that working class students don’t have to take on debt for a degree. His plan would also work to end legacy admissions – a form of affirmative action for the wealthy – and modestly increase federal funding for Historically Black Colleges and Universities, and reinstate rules protecting students from predatory for-profit colleges.

This alignment on college affordability is a bigger deal than it might seem.

Each piece is similar, or downright identical, to plans proposed by other candidates in the race. On the other, this alignment on college affordability is a bigger deal than it might seem. Candidates across the ideological spectrum, from Senators Warren and Sanders to former Mayor Buttigieg, Senator Klobuchar, and former Vice President Biden, have all incorporated some form of free- or debt-free college into their platform.

Most plans also recognize the burden of non-tuition costs like rent, childcare, and housing facing students. All of them expand Pell Grants, and most candidates (at least rhetorically) have decried the calcifying inequality within our higher education system. Harkening back four or five years, it was unclear that free- and debt-free college, or massive equitable investments in higher education, would ever be more than a fringe idea. Now, they’re almost taken for granted. The movement for free college, led by activists, racial justice advocates, and students, should feel emboldened and proud.

The details of each plan are important.

To be clear, the details of each plan are important. For one, Bloomberg’s investment in HBCUs pales in comparison to the plans offered by Warren, Sanders, Biden, and Buttigieg. His plan to end legacy admissions is vague and does not include clear action steps at the federal level. His investments in “proven” strategies to improve completion sound great, but if done on the cheap could be a disaster for students and institutions. And his plan for four-year colleges does not include a universal guarantee of free tuition, adding complexity to the system and potentially burdening middle-class students with high tuition and debt.  And even doubling the maximum Pell Grant by providing an additional $6,000 or so for low-income students, would leave some with thousands left over to pay for college costs, including living expenses, family care, and more: 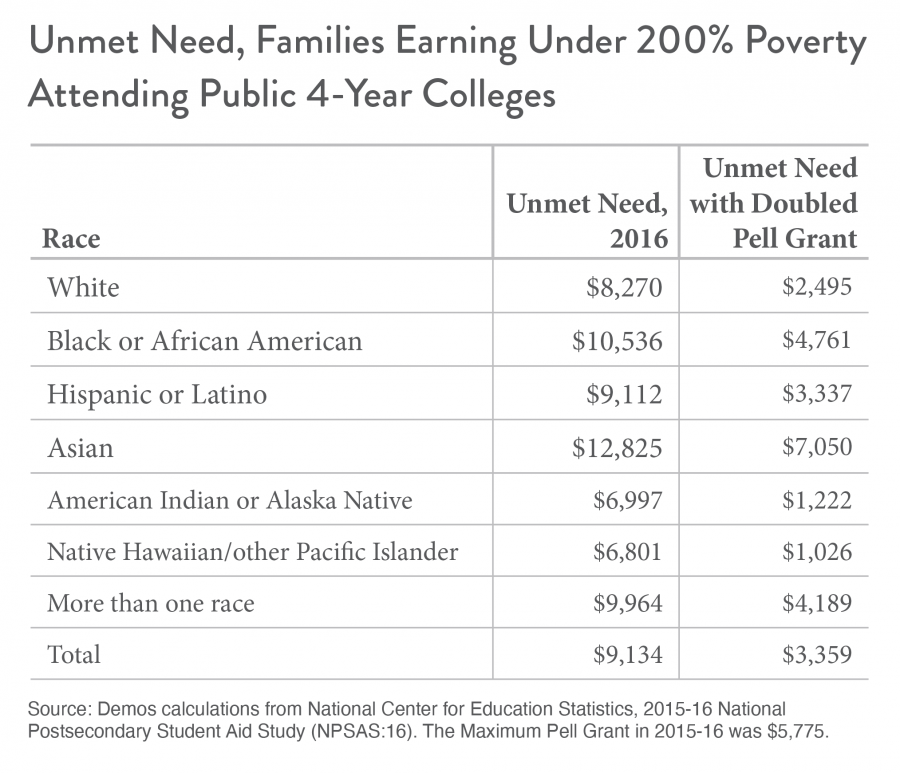 On balance though, advocates should be excited about the shift in the debate.

When it comes to addressing existing debt, however, there is far less consensus and much work to do.

When it comes to addressing existing debt, however, there is far less consensus and much work to do. And on achieving relief for the 45 million borrowers with student loans, Bloomberg’s plan is mostly silent and even somewhat strange.

To be sure, there are a few high points, including proposals to eliminate social security and wage garnishment for defaulted loans (something Demos has supported as well). Notably absent, though, is any proposal to partially or fully cancel any student debt.

The Bloomberg plan would enroll all students in income-driven repayment (IDR) and lower borrowers’ monthly payment to 5% of their income (down from 10% under current plans). It would also cap the amount that could be forgiven at $57,500 after students pay their loans for 20 years; currently there are no limits on the amount that can be forgiven.

On one hand, lowering monthly payments sounds great. But as currently structured, borrowers can already make $0 payments under IBR if their wages are at or around the poverty level. So while lowering the amount of income from 10% to 5% may help middle-income borrowers, it does nothing to help the lowest income borrowers.

But capping the amount that could be forgiven could harm low-income borrowers and borrowers of color, especially as interest accrues on their debt. We know that black students are overrepresented among those who take on $50,000 or more and $100,000 or more in debt. By capping the amount of forgiveness, this leaves many black students in perpetual debt.

The instinct here is to limit forgiveness among those who take on large amounts for graduate school. But there are better ways to do so than placing a cap on the amount that anyone can receive. For one, the Bloomberg campaign could provide unlimited forgiveness for low-wealth borrowers, while tweaking repayment for high-income households (for more in this vein, see these recommendations from the Institute for College Access and Success). Another novel idea might involve the billionaire candidate funding universal loan forgiveness by increasing taxes on very wealthy, disproportionately postgraduate-educated households.

While there seems to be some consensus on the need to offer a guarantee of free 2- or 4-year college to most students, expand grant aid and broader investments in public higher education, there is considerable daylight on cancelling or forgiving debt.

Demos believes such a bold stroke, either through executive action or legislation, would be a transformative investment in the most diverse generation of students and borrowers in history. One hopes that the former Mayor and other candidates skeptical of the idea are asked about it on the campaign trail.