New evidence from the New York Fed suggests that New York’s middle class has continued its slow and seemingly inexorable decline. Coauthors Jason Bram and the James Orr unwittingly reach this conclusion in their exploration of the tension between New York’s record number of jobs and its record unemployment rate. In their exploration, they reveal the inadequacy of our economic measures of well-being and expose the problem beneath the surface.

Bram and Orr estimate that, as of the beginning of 2012, New Yorkers held 3.86 million jobs, the highest number it’s ever recorded and a substantial rebound from its job losses since 2009. Yet simultaneously, New York's unemployment rate stands at 10 percent, the highest recorded rate since this recession began. In conclusion, they observe that the “brisk growth in jobs in the city and the lack of growth in the number of employed residents in the city is unprecedented.” They represent those two metrics below: 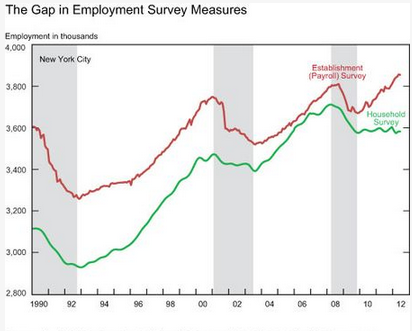 What can explain the difference?

Bram and Orr first tackle the problem of commuters. New York has an anomalously high number of commuters. They’re an insufficient explanation: were they truly stealing newly created jobs, suburban communities would be significantly better off. They aren't.

The most plausible theory that Bram and Orr put forward is that the jobs number is inflated by New Yorkers who hold more than one job. The number of jobs is measured by a survey of businesses, whereas the unemployment rate is derived from a survey of actual households.  The household survey, which reports high unemployment, would count a person with two jobs as a single jobholder, whereas the business survey would entail a count of each and every job in the city. That high jobs figure could easily obscuring the deeper issues with New York’s labor market. Bram and Orr dismiss this conclusion, arguing that there’s been no evidence of a national trend. But their rationale is inadequate.

The most plausible explanation for the rise in net jobs coupled with rising unemployment is that the people are increasingly holding multiple, poor jobs. There is ample national evidence that it has been increasingly difficult to find a good job. Kevin Drum reports, via research from the Center for Economic and Policy Research, that, beyond income stagnation, the percentage of workers with good jobs (a job that pays the median wage of $37,000) has declined from 27 to 24% since 1979, with the percentage of Americans with good-paying jobs reaching its nadir in 2010. The decline was remarkably consistent among workers with variable degrees of education. Further, in their report on job quality for Demos, Ben Peck and Amy Traub found that “the majority of jobs gained during the recovery have been in low-wage occupations.” If job quality has declined, then it makes sense that workers would increasingly need to hold more than one job to make ends meet

Regardless of the causes or solutions, the first step is for policymakers to acknowledge that New York, like the rest of the country, has a serious problem with not only unemployment, but jobs quality. The staggeringly high unemployment rate suggests widespread economic malaise and the unprecedented number of jobs is not a relief if those jobs are unprecedentedly bad. There are solutions. Raising the minimum wage would be a good start.

Policymakers need to step up. Michael Bloomberg encapsulated the problem when during his commencement address at Cornell, he advised graduates that even “if you haven’t found a job yet: You’re better off coming to the city than sitting on your parents couch.”

No, you aren’t. You're better off finding a good job, anywhere you can. The question: are there any left to be had? New York hasn't found a solution to employment that the rest of the country's hasn't. It's just swept the problem under the rug.