By Almost Every Metric, the Wealthy Engage Much More in American Politics

The wealthiest Americans are, by far, the most politically engaged and exercise enormous influence as a result.

A groundbreaking new study out today in the Political Science Quarterly by Fay Lomax Cook, Benjamin Page, & Rachel Moskowitz “Political Engagement by Wealthy Americans” begins to quantify the engagement of the ultra-wealthy in politics. It isn’t pretty.

There’s a large class gap in voting, with the poorest Americans voting 30% less than the richest in 2008. But what's less known is how differently the elite participate in politics before and after an election. There’s good reason to believe the wealthiest Americans would engage more in politics: they can expect more in return. A politician answering a call from someone who can write a nearly unlimited check will take the call. Not only that, but they have the most vested interest in many of those calls: they can extract more lucrative rents from preferential treatment.

The Cook, Page & Moskowitz study helps solve that problem, looking specifically at the most difficult group to quantify: the top 1 percent of wealth-holders, who are famously averse to answering survey questions.

Here’s the breakdown of the SESA sample, that the study uses to define wealthy:

Their median wealth is $7.5 million and the mean is $14 million. As the authors conclude, "ours is the wealthiest representative sample whose behavior has yet been studied."

Here's the various and troubling ways the rich are much more engaged than the rest of Americans: 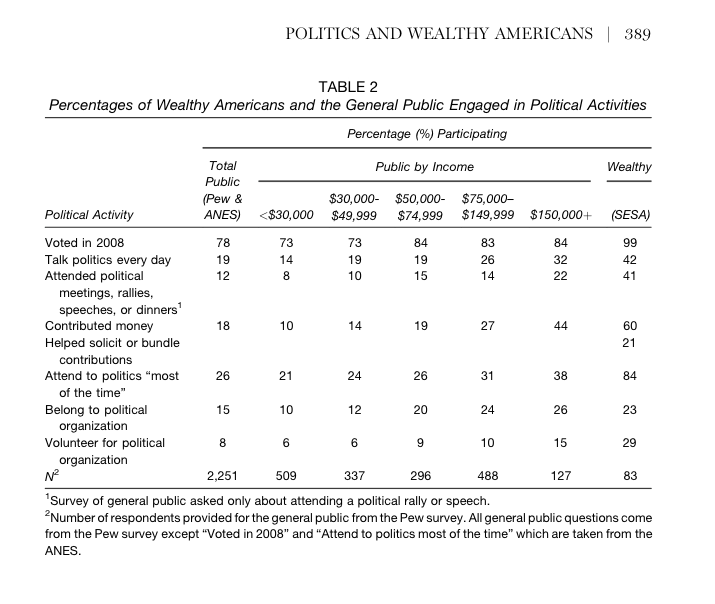 As the study notes "by several measures, wealthy Americans participate politically at two or three times the rate of members of the general public as a whole." Moreover, the rich are at least twice as likely as the merely affluent to participate in a meeting, volunteer, or even spend time following politics. Even compared to someone making over $150,000 a year, the wealthy are much more engaged with our political process.

They are also more likely to contact an elected official at all. At least half of the wealthy had contacted a politician, compared with less than 21 percent of those with low incomes. 44% of those contacts were about what the authors conclude to be "narrowly-interested concerns" like procuring favorable tax benefits, regulatory benefits, or other forms of economic rent seeking. 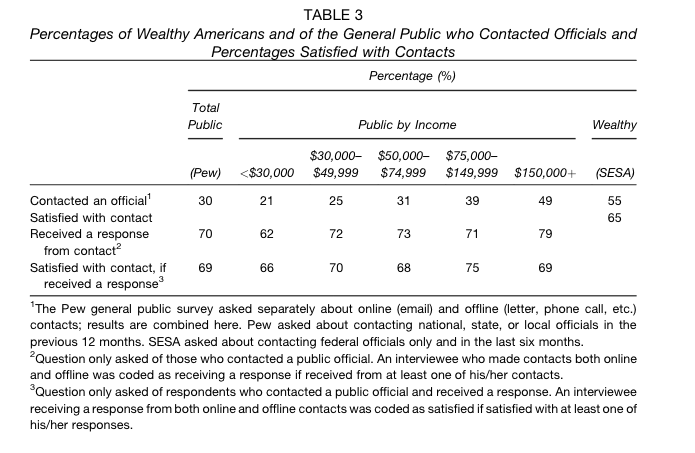 And as would be expected after the series of disastrous money-in-politics Supreme Court decisions, the wealthy also exercise their influence through their pocketbook, donating at higher rates. 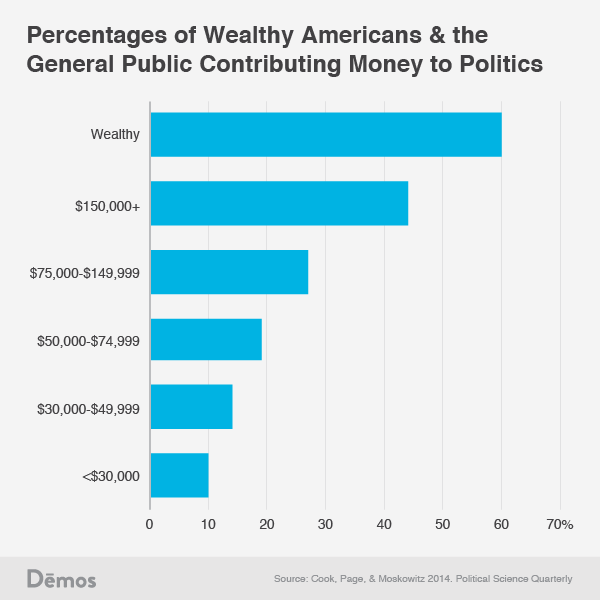 But it's not just the rate, it's the size. Political donations from the wealthy, as would be expected, were substantial and often bundled with other donors: "On average, our wealthy respondents reported giving a very substantial $4,633 to political campaigns and organizations in the past 12 months. Remarkably, one fifth (21 percent) of them reported soliciting or 'bundling' contributions from other people to a party, candidate, or political cause."

With political engagement, and nearly unlimited money to donate to political campaigns, comes much greater influence. Backing up our findings in Stacked Deck, this study reinforces that it's no coincidence economic inequality has escalated while political power has concentrated. Inequality is perpetuated by an engaged, self-interested elite looking out for itself.