2016’s “Missing Voters” Can Be Found with Automatic Voter Registration

This time next year, the election of 2016 will be over and America will have chosen its next president.

But how many Americans will have actually participated in making this decision?

In the 2012 presidential election, 1.3 million votes decided the winner in the ten states with the closest margins of victory.  But nearly 20 million eligible citizens in those states—Colorado, Florida, Iowa, Nevada, New Hampshire, North Carolina, Ohio, Pennsylvania, Virginia, and Wisconsin—are missing from the voter rolls.

Overall, these “missing voters” amount to half, and in some cases more than half, of the total votes cast for president in these states. This should ring huge alarm bells for those who care about our society’s health and future.

Fortunately, there is a solution. In a forthcoming paper, we predict that if those states adopt Automatic Voter Registration, they would add 6.8 million eligible citizens to their voter rolls. That means that the number of potential voters added through automatic voter registration in the previously-mentioned ten states would be more than five times the number of voters that decided the 2012 races in these states.

These “missing voters” would finally be in a position to have their voices heard.

In every state except North Dakota, a citizen must be registered in order to cast a vote and choose their representatives. The ability to assert your preference between candidates in an election (or for or against a ballot proposition) is dependent on being registered to vote. Today there is no reason to require people to opt-in to register to vote and continuously keep their registrations updated to exercise this fundamental right to self-governance. States should build voter registration rolls from records that demonstrate voters’ eligibility, leaving individuals the opportunity to decline to be registered. In a democracy, running elections is a public good, and we can utilize modern technology to facilitate political participation, making elections more efficient, and less expensive, in the process.

Of course, not everyone who is registered will always vote. People may not have time off from work (particularly in states without early voting or with restricted hours for early voting), or may not think their vote matters because of the huge influence of big money in our government. But in a recent study of 18-29 year old non-voters, 55% of Black youth, 45% of Latino youth, and 61% of White youth said they didn’t vote because they were “not registered to vote,” by far the highest reason given.  Automatic voter registration can transform voter registration from a barrier into a gateway to participation.

Voter registration and political participation should not be a partisan issue, contrary to implications in yesterday’s New York Times article on AVR. Our democracy works when it works for everyone, and right now we are facing a crisis of low political participation. In a democracy where the government gets its authority and legitimacy through the consent of the governed, as channeled through elections, having tens of millions of missing voters is a measure of how much work we have left to do to renew our country’s promise of political equality. Today the real issue of electoral integrity is equal electoral access.

Modernizing our archaic, unnecessarily-unwieldy voter registration system by adopting automatic voter registration is a solution whose time has come. We should welcome every voice in the political process, and encourage the participation of every citizen.  By adopting Automatic Voter Registration, states can bring these millions of missing voters into our country’s political life, strengthening our country’s promise of e pluribus unum: that out of many, we are one. 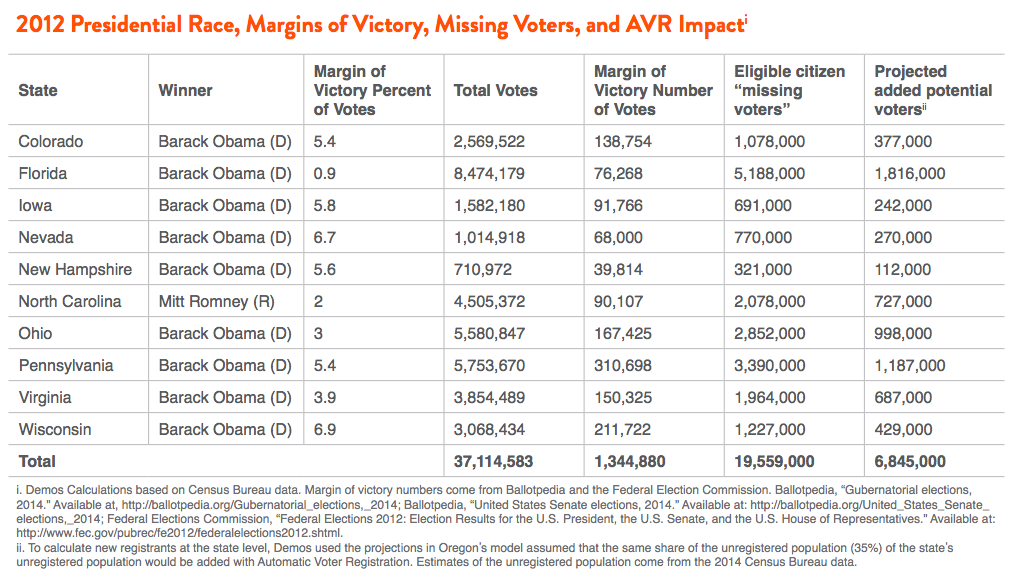 (A larger version of the table is also available.)